This rule comes from Robert Cialdini’s book, Influence. The Rule of Reciprocation says that we should try to repay those who have provided us with something. This can be utilized to persuade someone into doing an act by giving them an item or gift. If someone sends us a birthday present, we should be sure to send them one back. If someone offers you tickets to the game, you should repay them somehow – buy them some beers will ya!

When someone gives you something, that is actually worth value to you (weather monetarily or emotionally), and you don’t pay them back you get this weird feeling in your gut. This feeling is caused by the Rule of Reciprocation. I first hand felt this feeling last week when I was down in Cabo. My wife and I were walking around the Marina in Cabo San Lucas, Mexico when we stopped to check out the sea lions and seagulls that were by the boat ramp. After standing there for a few seconds one of the fisherman called us over and offered to us a few fish to feed the wild sea lion that was begging at the edge of the water, of course my wife jumped at the opportunity! She was able to feed him and pet him a couple times. We even got to witness the sea lion chase off a seagull that was trying to snatch the fish from my wives hand before she could give it to the sea lion. It was great!

Right after she got done feeding the sea lion we left… and I got this weird feeling in my stomach. It felt like I owed that guy something, he was probably expecting money, but I didn’t have any cash with me. I thought for the next several days on my trip about going back to the marina to pay him, but I never pulled myself to doing so because around that same time I read about this rule. It caused me to realize what that guy had done, he had created a highly profitable niche business in the harbors of Cabo. He was also utilizing a highly effective psychological tool to get people to willingly and happily give him money. A fish for him can’t cost much at all, he is a fisherman after all. It may have cost him $.20 for the 2 little fish he gave my wife, if I had cash I would have easily have given him $10 for the wonderful experience- those are damn good margins mi amigo!

Pay every debt, as if God wrote the bill. – Ralph Waldo Emerson

So anyways, the idea is to give your customers something for free so that they can return the favor to you in a way that makes sense for your business. I didn’t know about this rule when we did it, but we used it for one of our apparel brands a few months ago by giving away free shirts to our top 50 customers over the past year and the experiment has worked stunningly. Many of the customers we sent free shirts too ordered new shirts soon after.

Takeaway: Find a way for your business to use the Rule of Reciprocation to your advantage, weather it be sending your customers something for free unexpectedly or giving someone at the harbor a fun experience that costs you pretty much nothing. It will be worth it.

Recently I’ve really been getting into Robert Cialdini thanks to Andrew, over at Mixergy. So I’ve decided to start doing “Cialdini-isms” because I’ve really come to enjoy his insights. You can learn more about Mr. Cialdini here if you’re interested.

So a fixed-action pattern is an automatic response to a certain stimuli causing an instinctual/automatic action/response. He gives the example of a mother turkey based on ethology, the study of animals in their natural settings. Mother turkeys are good mother’s, they take good care of their young chicks but it is when they take care of their chicks which shows their fixed-action pattern. The mother does notice their young’s’ smell, touch, and appearance, but the biggest thing that gets the mothers to care for their young is the “cheep-cheep” noise that they make. This is the main thing these mothers focus on. If their chicks aren’t making that noise they don’t take care of them.

A group of scientists decided to conduct a study to see if the mother turkeys would take to other animals  if that same “cheep-cheep” noise was present. So ,they decided to test this with a stuffed polecat, a  natural enemy to all turkeys, naturally you would think a turkey would be pissed about a polecat near its nest… and they were. If no “cheep-cheep” noise was present it was a war zone! But when they had the “cheep-cheep” noise playing from a speaker within the stuffed polecat the mother turkey invited it to dinner, for tea and biscuits. The mother actually treated the polecat like it was one of its young if the “cheep-cheep” sound was playing! Yea… I know turkeys are known for being stupid, but still that automatic response is intriguing. 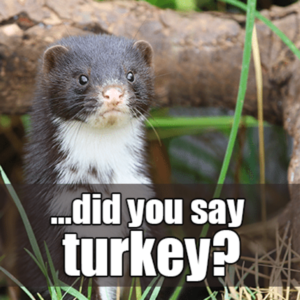 He calls it ‘click’ and ‘whirr.’ Click and the appropriate tape is activated(cheep-cheep); whirr and out rolls the automatic sequence of behavior. (taking care of the polecat)

Does it work on us? After all we’re superior beings… “that microscopic turkey brain doesn’t compare to us… not a chance.”

The fact that the new price for the jewelry read as “expensive” due to its new price allowed people to have the fixed-action pattern of “expensive = good” allowing them to justify buying it. It gave them a shortcut, because it’s impossible to know everything about everything, especially in our current 24/7 world where we’re constantly bombarded with stimulus. Our minds need shortcuts.